ARUFON
ARUFON was started 38 years ago by Rich, W1RV and Bill, WB9NLI.  It initially was put up on the fledgling beginnings of the info age as a dial-in BBS or Bulletin Board Service. While almost all members at the time were heard via HAM radio on 3.9777 kHz. Due to QRM it was later moved to its current spot of 3.845 kHz. ARUFON has persisted into the internet age in the 1980's and 1990's and soon had its own webpage managed by webmaster Ken, KB9I. As many of the members were both laymen and experts in many technical topics and also former military members and ufologists it carried along the ever changing landscape that is Ufology.  Rich at this time along with others attended many conferences and in-person events that had such notables as Betty Hill, Travis Walton and Stanton Friedman.

Rich and Bill were the NCS net control ops along with some others during this time. Rich soon became the Net control for the current Sunday night net after the passing of his good friend William, WB9NLI.  As the years moved into the 2000's with cell phones and  new digital modes, A new thing arrived called VOIP or Voice Over IP.  The RF side which at times would have unusable conditions turned to the internet and a piece of software to allow internet talks as a group called "Echolink" for HAM radio operators. Paul, N1PA setup the server and the software in a remote repeater site on a mountain in N.H. and still maintains the hardware remotely or onsite as needed.

With this new option in place Rich began to simulcast the Radio side of the net with listeners on the Internet being able to send text and comments while radio ops were checking in and commenting on the radio side.  At the beginning of 2020, Yahoo Groups which was the conduit for online forums for ARUFON decided that their plethora of groups and servers would be shut down. After some scrambling on my part, I found some software that would allow me to backup the years of data, messages and so forth and transfer them over to a free, no cost web alternative called Weebly.com. With the Yahoo group soon to be gone I also moved the forum as well to arufon.groups.io which also was easy to setup and many of the yahoo groups admins choice for a new home.
Rich is still around and will drop in to the Echolink or read the mail on the groups.io site.

ARUFONites as Rich affectionately called the members over the years come and go but current revelations in the media are having a effect of new folks wanting to discuss and or bring up their sightings on the now three choices of media, HF radio, Internet groups.io or Echolink.

We hope you will come back and check this site often for new and interesting  things as they are relevant to the ever changing landscape that is the UAP/UFO topic. 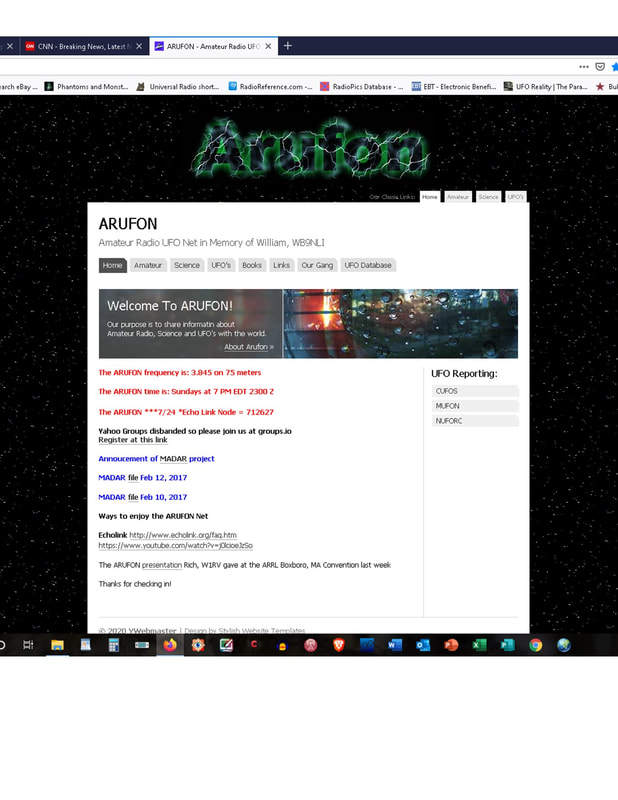 Here is a look at the old ARUFON website on the internet which was created in the 1980's.